Without surprise Bitcoin (BTC) was the most attractive asset for institutions last week with $97.5 million incoming, Ethereum came in second with $17.3 million last week and Cardano took the third spot just behind at $16.4 million. 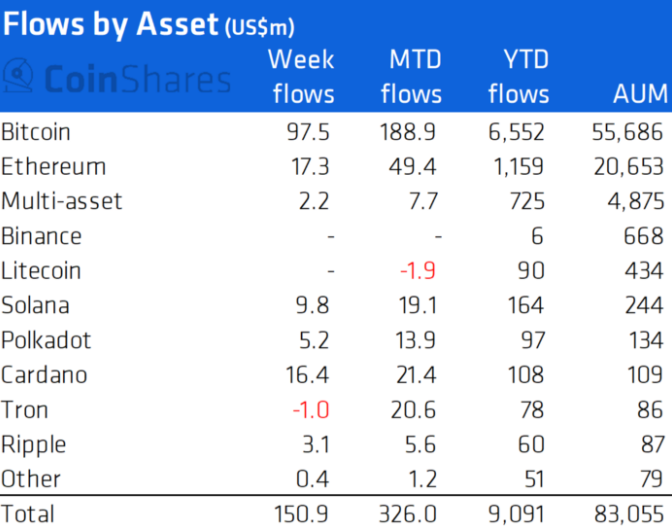 Cardano’s Charles Hoskinson has recently concluded his tour around Africa, picking up opportunities in the continent for the Cardano project and blockchain technology in general. Hoskinson revealed that some announcements are in the pipeline.

I'm really loving how the roadmap for 2022 Cardano is coming together. It's a living ecosystem, growing, refining, adapting, and becoming stronger. The technology is unbelievable and we have so many great innovations coming to meet the hundreds of projects building on Cardano

CoinShares contributes the rise of institutional capital to almost $90 billion this year to the recent price rally as many top cryptocurrencies reached new all-time highs.

Currently trading below its all-time high and weekly investment flow records, Bitcoin (BTC) is slightly giving in market dominance, according to CoinShares.

“Bitcoin saw the majority of inflows totaling $98 million, pushing [assets under management] to a record $56 billion.

This is despite its dominance (relative performance) versus altcoins waning over the week.”

“Although flows have been positive recently, we have witnessed subdued volumes in 2H, averaging $750 million daily versus $960 million in 1H 2021.